The tiny piglet lay on her tummy in a filthy pen full of rusted roof sheeting, wire and rubbish.  She was all alone.  Her back legs were splayed out on either side of her body.  She looked up as Toni Brockhoven, head of Beauty without Cruelty South Africa, reached out and gently picked her up.  The little pig snorted in Toni’s ear and immediately became Snortie.  Toni had negotiated with the farmer of the backyard piggery in Cape Town to release the pig into her care and she brought her to Greyton Farm Animal Sanctuary.

When I took Snortie from Toni and placed her on my lap she snuffled her snout into my neck and I was completely in love.  I knew that we had to do everything we could for this brave, trusting little girl.  It’s hard to believe that she can be so affectionate when all she’s known is neglect.  Had the farmer tied her back legs together, temporarily, shortly after birth, she would have been able to walk but this didn’t happen, leaving her paralysed.

We placed Snortie in a small paddock with another pig called Big Bella Boo who had come to us as a former pet pig but she had become so obese that she had fat blindness – her eyes were forced close by the fat around her face.  Under our care she had lost a lot of weight but she was fragile as a result of her past and didn’t move around much.  As we had hoped, Snortie soon found Bella’s still quite large round tummy very warm and comforting and that night she was snuggled up to her, protected against the cold winter.

We took Snortie to the vet the next day for xrays and her skeletal system was found to be intact although she had compressed vertebrae from arching her spine to pull herself forward with her front legs.  We gently tied the back legs together with soft, wide elastic and then thought about therapy.  We approached Pets in Balance in Somerset West where there is a hydrotherapy tank.  At her first session Snortie showed a willingness to work hard and she was soon standing, buoyed up by the warm water.  The therapists fell in love with her as quickly as I had and offered to sponsor her sessions.  We did three months of intensive therapy, three times a week.  It was a big commitment, the journey taking one hour each way, but we all did it for Snortie. 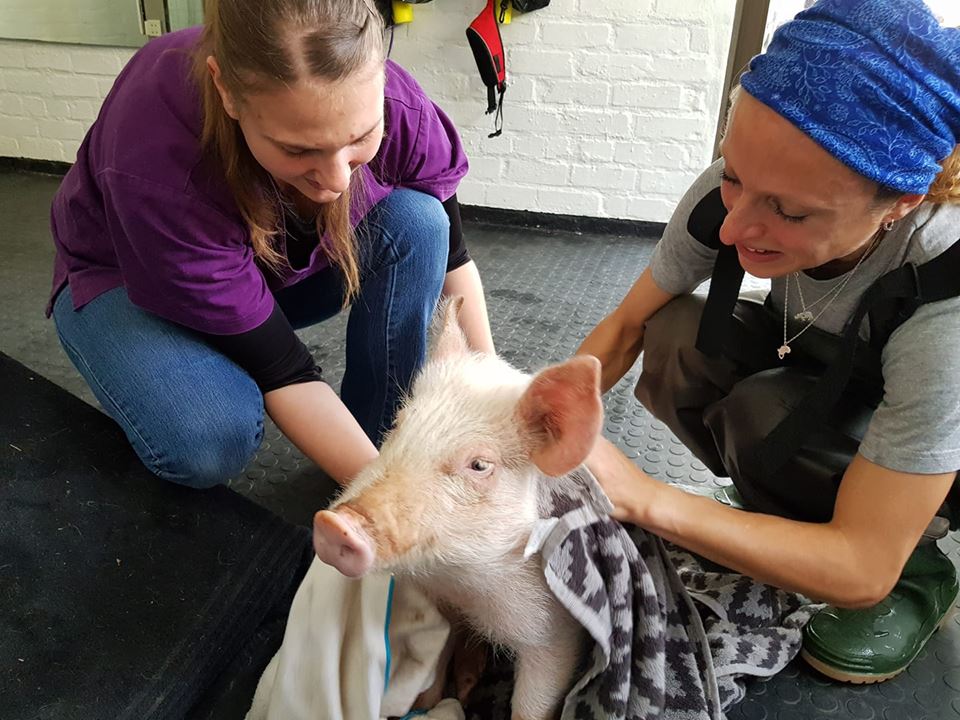 We took plenty of videos of Snortie in the tank and then being dried off.  She absolutely loves the treatment and a film of her being towelled dry went viral with over 500,000 views.  Her cute pink snout and happy demeanour have turned her into quite a poster child.

Snortie suffered a set back when her  adoptive piggy mum Bella Boo passed away after a short illness.  Sadly the health conditions of her past caught up with Bella Boo and we were devastated when she left us at the age of just seven.  Snortie’s grief was plain to see in her face.  Her usually happy demeanour changed into one of quiet sadness.  We didn’t leave her side for a few days and tried to find ways to raise her spirits.  After a week she started to perk up.  We opened the gate of her paddock which leads to another space where yet another formerly obese pig, also called Bella, lives with her friend Ollie, a black pot-bellied pig.  Ollie and Bella 2 accepted Snortie and she now lives with them, cuddling up to Bella 2 at night.

News of this special piggy reached the acclaimed South African artist Marius Jansen van Vuuren, who had recently been commissioned to build a huge sculpture of a sitting pig in Manchester city centre in England to mark Chinese New Year and he asked Snortie to be his model.  It was easy to settle her into the sitting position that Marius needed, especially when food was offered as a reward and, after sending a series of photos from all angles to Marius, within just six weeks  Snortie was recreated as a seven metre high installation of a sitting piglet in one of the major cities of the world! 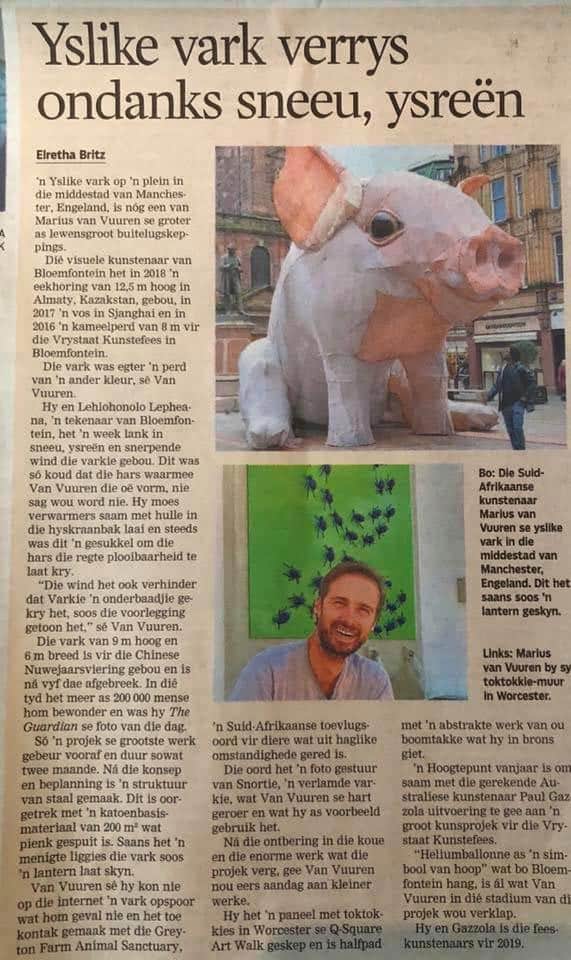 Thanks to the publicity from that event, many people came forward from all over the world to offer help and we have managed to raise the money needed to buy her a custom built wheelchair so that she can run around the sanctuary with the other pigs and lead a near normal life. 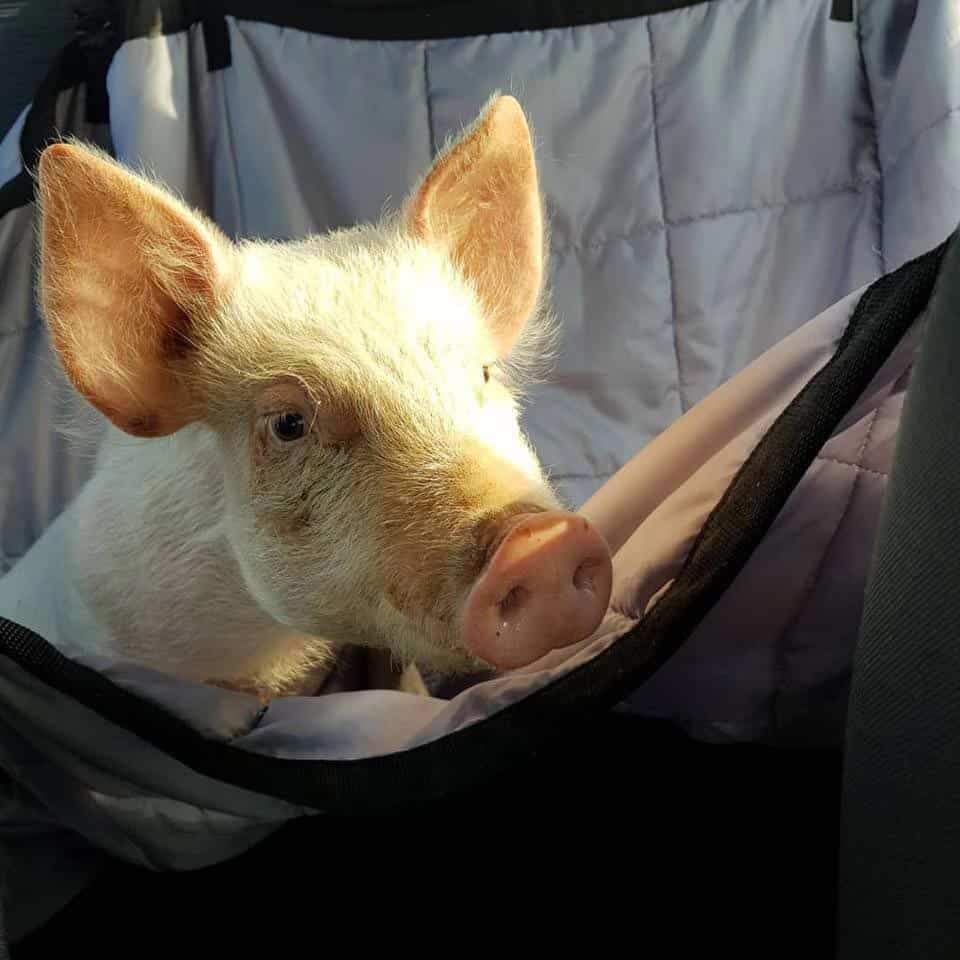 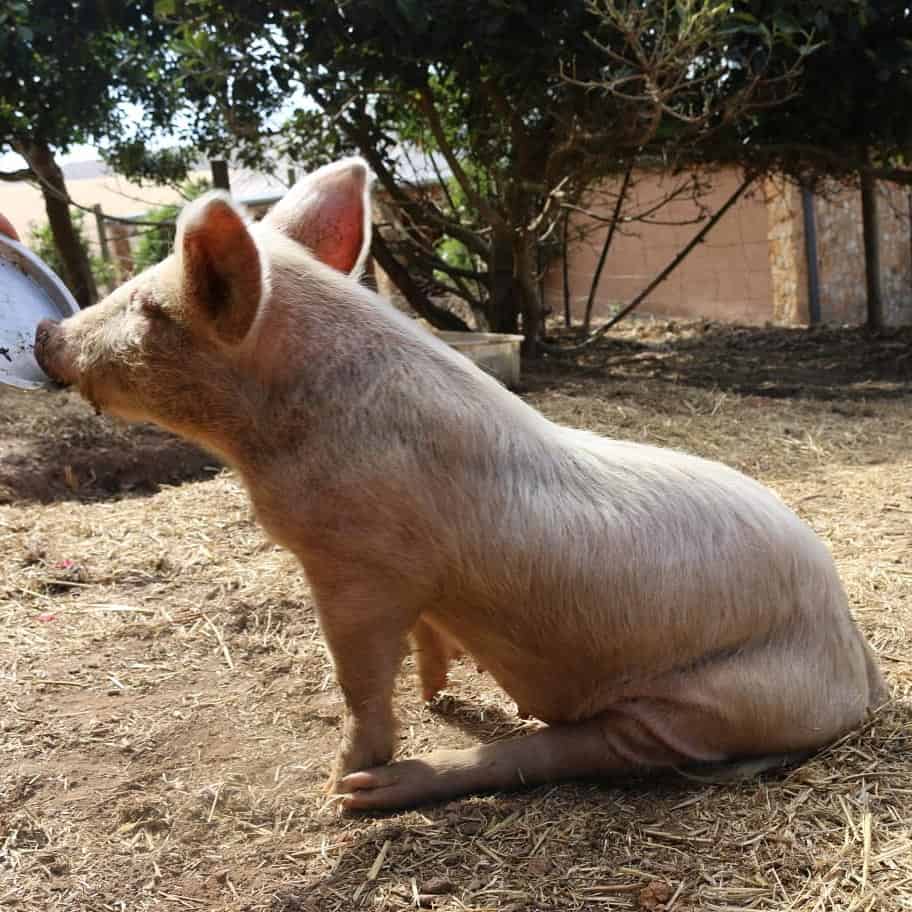 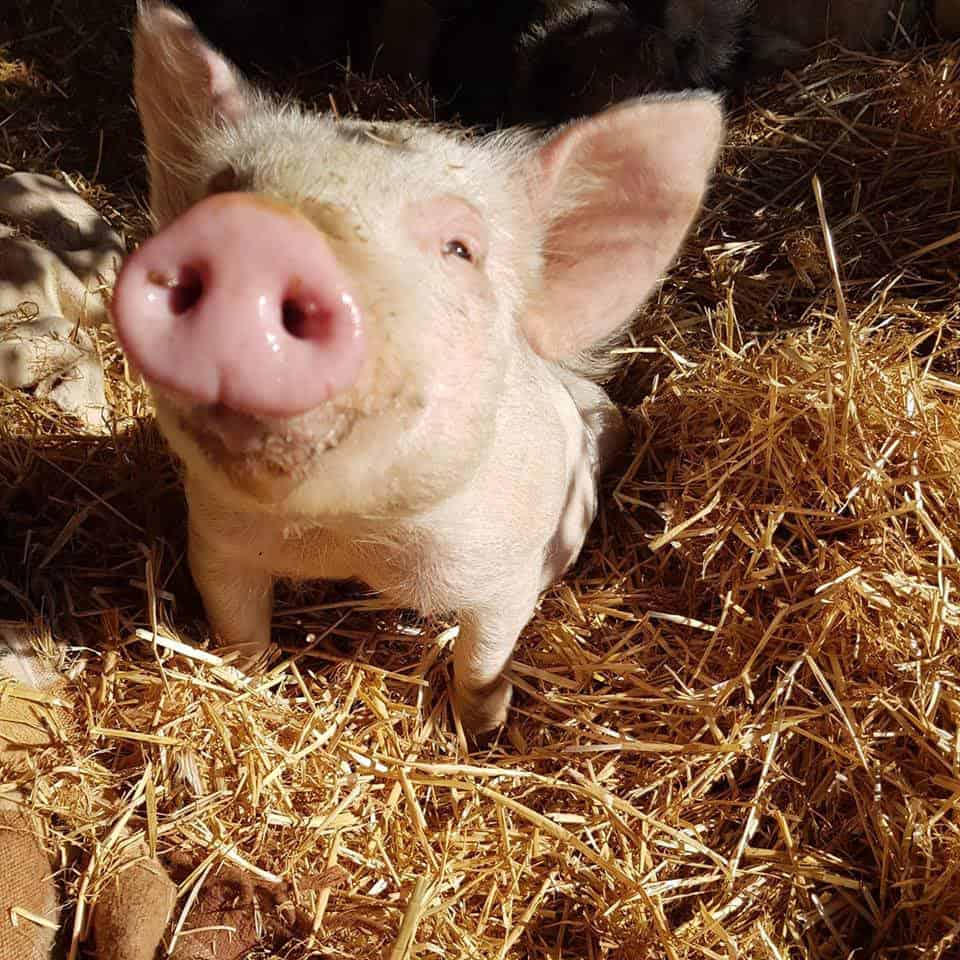 If you’d like to sponsor Snort’s care or other animals in need please visit our Sponsor-a-farm-friend Programme or if you’d like to make a contribution to the sanctuary please head over to our Donate page.