We were collecting straw from our usual supplier when we heard a small cry, it sounded like a baby version of a moo.  Following the cry, we went into a large barn and found around 24 very new calves, each in their own small pen with barely enough room to turn around.  Another moo and we identified the baby who was crying out.

She was tiny, only a few days old.  As a female why had she been taken from her mother so young?   Usually they stay a bit longer with mum than the boys because they are kept to go through the same cycle of pregnancies as their mothers, to produce milk.

The farmer told us that she was quite a sickly animal and that it wasn’t worth the expense and effort of keeping her going as she would never come to anything.  We asked if we could take her and he allowed us to.

Back at the farm we had two other calves who were already quite advanced but still on the bottle.  We gently placed our new baby with them, in deep straw, in their own shelter.  She seemed to find comfort in the other warm bodies around her and snuggled up.

We named her Luna in keeping with the universe theme we seem to have going with our cows!  We have our five year old cow Stella, her fully grown calf, Moon plus Nova and, well, Charlotte.  The latter was already named when her rescuers bought her to us so we honoured their choice.

Luna required 24 hour care.  We took her to the vet after giving her a day to settle in.  She had multiple conditions including the start of pneumonia, a heavy parasite load, digestive issues, low glucose and some festering sores.  She was kept at the vets for a few days on a drip while they battled to stabilise her.  It was the start of a long six weeks of battling to save Luna.  Her glucose levels would not maintain themselves.  She would be fine after a drink of milk but half an hour later her blood sugar would plummet, her head would flop to one side and she was unable to stand.

We were alerted to another calf, who we called Phoenix, who also could not maintain his glucose levels.  Eventually, after a two week battle, Phoenix lost his life and we feared that Luna would not make it.  She had made friends with Phoenix during their many stays at the clinic so we brought her home to the distractions of the farm and prayed that her body would start to regulate itself.

And it did. After losing Phoenix we were just not ready to let Luna go.  We fed her small amounts every two hours, day and night, to try and keep her levels of glucose up.  She picked up weight, she started to show more interest in life. Subsequent checks showed her glucose was holding.   Being so fragile, she struggled to keep up with the other calves so we made a decision to take her to a bigger paddock where we were raising eight lambs along with two ewes and their twin lambs.

Luna thrived in this slightly less boisterous company with animals that were a little smaller than her.  She remains there with them today, going out into the fields with her flock and coming home to sleep with them at night.  She is healthy, strong and lively with a deep love for her lamb brothers and sisters, and the humans who saved her.

Most of the care of Luna was taken by two outstanding volunteers, Sophie and Danielle.  So taken with the experience of rearing Luna were these two young women that they each had identical tattoos made for their arms, which say:  Luna and the Lambs 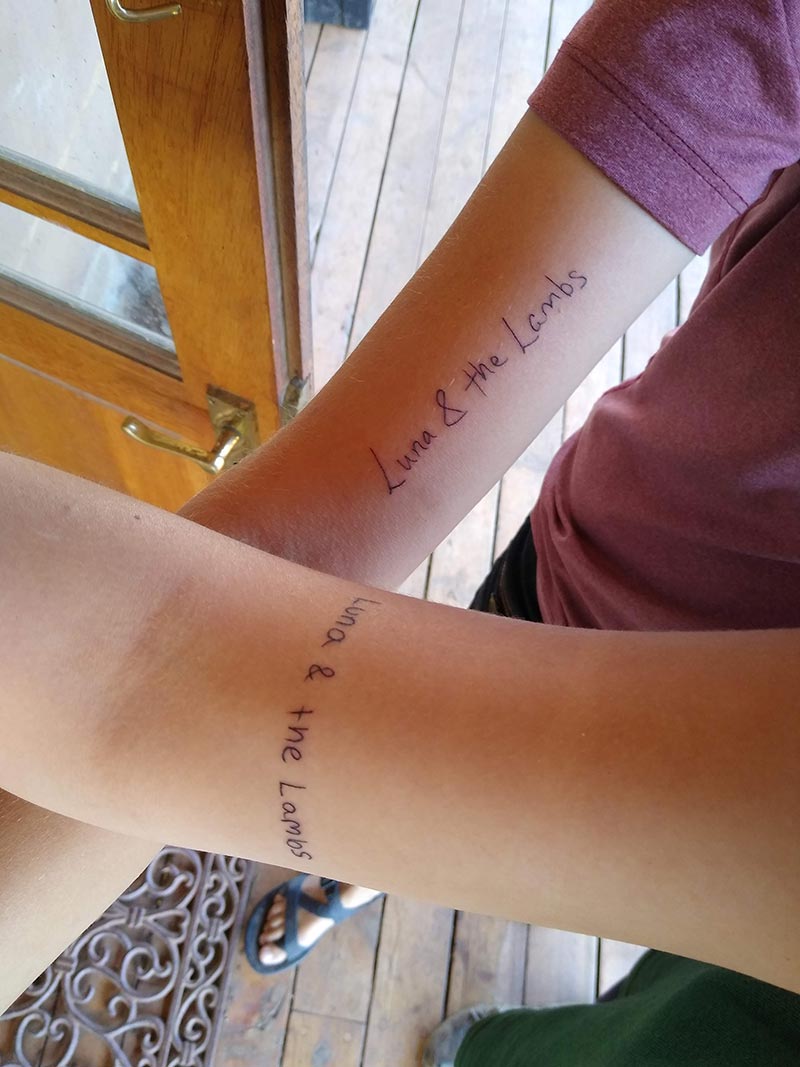 If you’d like to sponsor the care of Luna and her lambs or other animals in need please visit our Sponsor-a-farm-friend Programme or if you’d like to make a contribution to the sanctuary please head over to our Donate page.